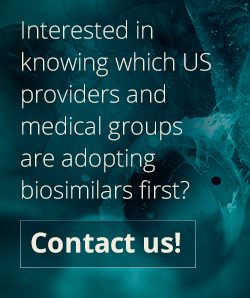 It’s a widely held belief that biosimilars, or “generic” versions of biologics (medicines produced from living organisms), hold great promise to reduce healthcare costs worldwide. Because biosimilars require less money to develop, they typically sell at a discount to their biologic counterparts. The IMS Institute for Healthcare Informatics estimated that biosimilars could generate EUR50-100 billion in savings by 2020.

While Europe has given biosimilars a warm welcome with 35+ already approved, the United States has lagged. Through 2017, the FDA approved 9 biosimilars, only 3 of which have launched.

The main area garnering approvals so far (with 6 approvals and 2 launches) are biosimilars that treat patients with chronic inflammatory diseases like rheumatoid arthritis, Crohn’s disease and ulcerative colitis. These anti-TNF agents keep the body from attacking otherwise healthy cells in patients.

The first anti-TNF (and the second biosimilar ever) approved in the United States, Inflectra, had high expectations. Just a year after being introduced in 2015 in select European countries, Inflectra took 20% of patients from primary biologic Remicade.

But sales of Inflectra didn’t take off in the United States when it launched in July 2016. One year later in July 2017, Inflectra made up just 2.3% of the overall infliximab volume.

Pfizer Essential Health president John Young said in an investor call that commercial health plans have been slow to cover Inflectra, which he attributed to “Johnson & Johnson’s [biologic Remicade’s manufacturer] exclusionary contracting with insurers and providers.”

Even in Medicare fee-for-service where Inflectra was covered immediately, however, the numbers don’t look good. During the first half of 2017, only 207 providers prescribed Inflectra in doctors offices compared to Remicade’s 5,206. Overall claim volume lagged the market, as well, with Inflectra making up 1.35% of infliximab volume based on claim count.

Initial estimates showed Remicade volumes decreasing 15% when Inflectra entered the market. Since then, Johnson & Johnson has publicly stated that they saw a 5% decline in sales. Our calculations from Medicare show a decline of 2.78% in the outpatient setting.

When Medicare providers did adopt Inflectra, however, they did so in a big way. A mere 16 providers of the 207 who prescribed Inflectra in the 1st half of 2017 accounted for 635 claims, or 43.7% of the total claim volume. Nearly all of these providers were Rheumatologists, and more were located on the West Coast than the East.

Another factor in the adoption of Inflectra in Medicare is pricing. As Dr. Adam J. Fein, CEO of Drug Channels Institute points out in his blog post, Inflectra priced above Remicade in the 1st half of 2017. (Based on our calculations from Medicare, it did indeed.) Which begs the question – if lower prices drive the adoption of biosimilars like Inflectra, and Inflectra was priced higher than Remicade, why did any providers prescribe it in 1st half of 2017?

Inflectra prices went down in the 2nd half of 2017 (both due to WAC/ASP discrepancy resolving itself as described by Dr. Fein, and because Inflectra increased it’s 15% discount to 35% in July 2017 when Merck launched its biosimilar Renflexis.) While Symphony data indicates that Inflectra sales started to increase substantially in May 2017, time will tell how much market share biosimilars Inflectra (and now Renflexis) can take from Remicade.

As CEO, Laura helps set CareSet’s vision and coordinates the team in executing the go-to-market strategy. Laura previously served as COO at 2nd.MD, where she grew the company from concept to serving Fortune 500 companies. Laura holds a B.A. from Rice University and an MBA with High Honors from the University of Chicago Booth School of Business. Outside of the office, she enjoys tennis and tickling her two young daughters until they cry.

Do doctors force their patients to use fax? A CareSet Journal FOIA Whitepaper