September 2020, I made the decision to participate in one of the SARS-CoV-2 vaccine trials. There is still vaccine hesitancy. My participation in this trial, along with my blog posts, are all in hopes of increasing transparency, and building trust within the trial community. You can follow my journey beginning with my first blog.

When the opportunity arose, I jumped at the chance to be a part of history and science. After my first injection, I didn’t have any issues. I began to wonder, did I actually get the vaccine? When I had arm soreness after my second injection, I doubled down, maybe I did get it! As I read more stories of people having a response, my confidence began to dwindle. I just didn’t know.

The question remained, what happens to the trial and its participants? Twitter was filled with questions and demands. It led to a large debate. Do the companies continue with the double-blinded study? Do they unblind everyone? And over what time period? Many questions, not enough answers.

There were suggestions to do a double-blind crossover, bringing in participants for another set of injections. Some participants dropped out of the studies when the vaccine became available to them. And others were left in the dark, patiently waiting to see what would happen.

January 2021, Vox posted an article laying out the options, and posing things to consider around the SARS-CoV-2 trials and their participants. 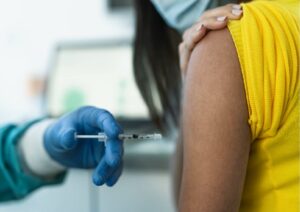 Not long after the EUA was granted, I received an email from my trial site. I was would have the option to receive the vaccine (if I was, in fact, team placebo) on my 4th visit. My next visit? April.

In January, I had a family emergency and ended up at a local hospital. Of course, they had the vaccine there, and it was late in the afternoon, with several doses set to expire that evening. “Want the vaccine?” A nurse asked me. Even though I didn’t qualify for phase 1A or 1B I could have taken the offer. I’m pretty sure, whatever the final phase is, I would be in that group. Like with Southwest Airlines, priority boarding, families, A, B, C…and then everyone else. Everyone else, that’s my group.

I turned it down. I told them I was a part of the trial and that I couldn’t. However, I could have taken it, and I would have known for certain that I was receiving the vaccine. But part of me thought, what if I was vaccinated already? I’m taking away the option from someone who needs it more. Like an actual health care worker. And so I waited.

And I waited some more. Throughout all of January, and the first part of February I was searching several hashtags and keywords on Twitter.

I learned a lot. Unblinded trial participants were celebrating. At first, most of them were health care workers. I wasn’t upset. It made sense for them to start receiving the vaccine. Some adults who appeared to qualify for phase 1A and 1B were unblinded as well. Again, it didn’t bother me. Then, more people started to become unblinded and receive the vaccine. People who did not appear to fall into either of the phases. People who looked my age or slightly older, even younger.

At the time, it wasn’t the fact that they were receiving the vaccine that bothered me. What bothered me was the fact that I remained unblinded. Yes, going into the trial I knew that it was double-blinded. But now that others knew, I wanted that luxury too. It wasn’t just because I was itching to go out or to increase my bubble. No. I wanted to confidently combat all of the misinformation on social media. “Hey, I received the vaccine and my arm was sore for a few days, that’s it!” I would have tweeted.

I wanted to tell all of those on the fence, or those who were hesitant about the vaccine that it was okay. That we could trust the science. Numerous friends were hesitant to trust articles and physicians, and pharmaceutical companies, but they were eager to hear about my experience. If I would have been able to say, “Yes, I definitely got the vaccine and I’m fine,” many of them would have probably said, “Cool, where can I get it?”

Finally, I got the call. “You were given the placebo.” I gasped. Shocked. In December of 2020, I gave blood. A few days later I received an update with all of my numbers, including test results — I had antibodies. I knew the jury was still out, but a part of me thought I had received the vaccine. And yet, I had not.

Our conversation continued, “If you’re interested, we can schedule you for vaccination.” Tough decision. Do I say “no”, and continue to be a placebo arm longer? Do I take it, so I can finally go see my grandma whose days are numbered? So I can finally relax my shoulders a bit. So I can start to get some resemblance of a life post-quarantine.

It was a tough decision, but a swift response. “Yes, please.”

Some might be envious of me skipping the line, but I put my body on the line months ago, not knowing how I’d react. There have been some cases of anaphylaxis, and although I’ve never experienced an allergic reaction to medicine before, I wasn’t 100% certain I would be fine. In a historically biased industry, where Latinx people have been left out of clinical trials, I feel like this is a win.

Next week I am going to the site to receive my first injection. Hopefully, they’ll let me record it. Ideally, I would do it live, but I’ll take what I can get. Rest assured, there will be more updates on my COVID-19 vaccine trial journey.

Alma helps CareSet with Data Quests. She graduated from UT Austin with a major in Anthropology. After moving to Houston she made cupcakes at the Black Hole coffee shop, managed the Caroline Collective co-working space, and then joined CareSet in 2013. She now pursues a location-independent lifestyle, working remotely for CareSet from New Mexico with her two cats as in-purrson officemates.