CMS, Hospitals, and the Future of CAR T-cell Therapy

What is CAR T-cell Therapy?

CAR T-cell therapy is immunotherapy. Physicians extract one type of white blood cell, the T-cell, copious amounts of these cells from the patient’s blood. Then, an inactive virus is inserted into the cell, specifically to place a gene in the cell. Next, the T-cell produces chimeric antigen receptors (CARs), which allow them to recognize cancer cells. And then the cells are multiplied in the lab until there are enough to administer back to the patient. After given chemotherapy to make space, the patient’s bloodstream is filled with new, fighting cells. 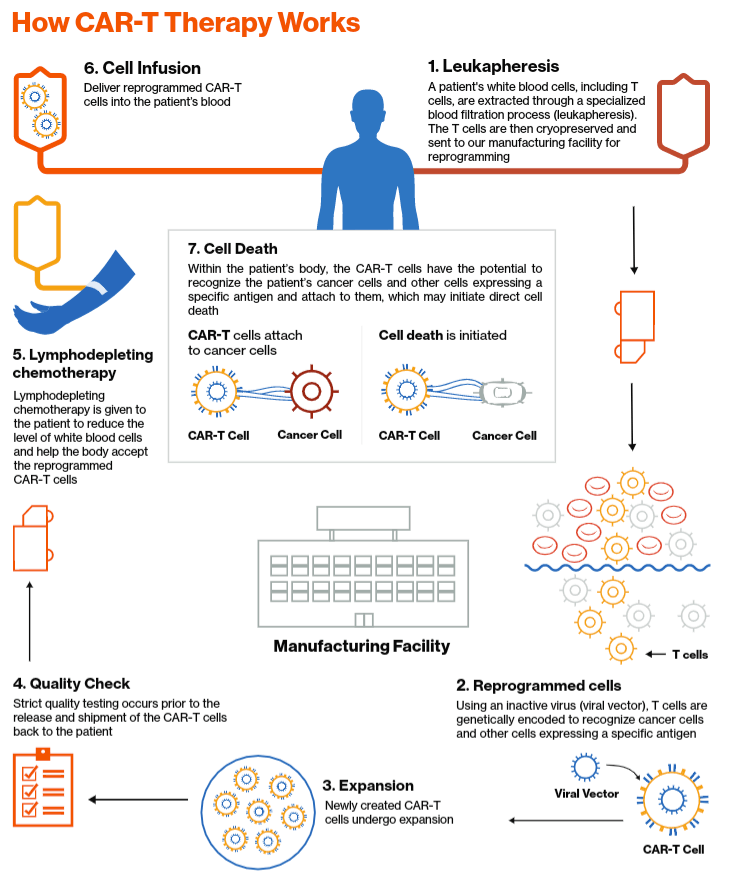 In August 2019, the Trump Administration finalized its decision on Chimeric Antigen Receptor T-cell (CAR T-cell therapy). “Medicare will cover CAR T-cell therapies when they are provided in healthcare facilities enrolled in the FDA risk evaluation and mitigation strategies (REMS) for FDA-approved indications (according to the FDA-approved label).” This is great news! It means more patients will have a fighting chance against cancer. With Medicare covering CAR T-cell therapy, patients who would not normally be able to afford the treatment out-of-pocket are given the opportunity to try the therapy.

CAR T-cell therapy is still new in the grand scheme of all things cancer treatment. In 2017, Novartis received FDA approval for Kymriah, the first gene therapy for cancer. Later that year, Kite (acquired by Gilead) received approval for Yescarta. There is so much promise in it even with limited familiarity. An article recently came out from the Cancer Research Institute discussing CAR T-cell Therapy. The article discusses some of the limitations as well as potential side effects.

At MD Anderson, two doctors studied the therapy in aggressive b-cell lymphoma and published their findings. They attest to the potential of CAR T-cell. In China, they show promise of the drug for prostate cancer. In both instances, they are excited about the results and conclude that more studies need to be done.

The technology is new. The treatment is a work in progress. According to Medicare claims data, thousands of medical oncologists and hematologists are treating patients, but from April of 2018 – September of 2019, there have been less than 800 claim counts for CAR T. 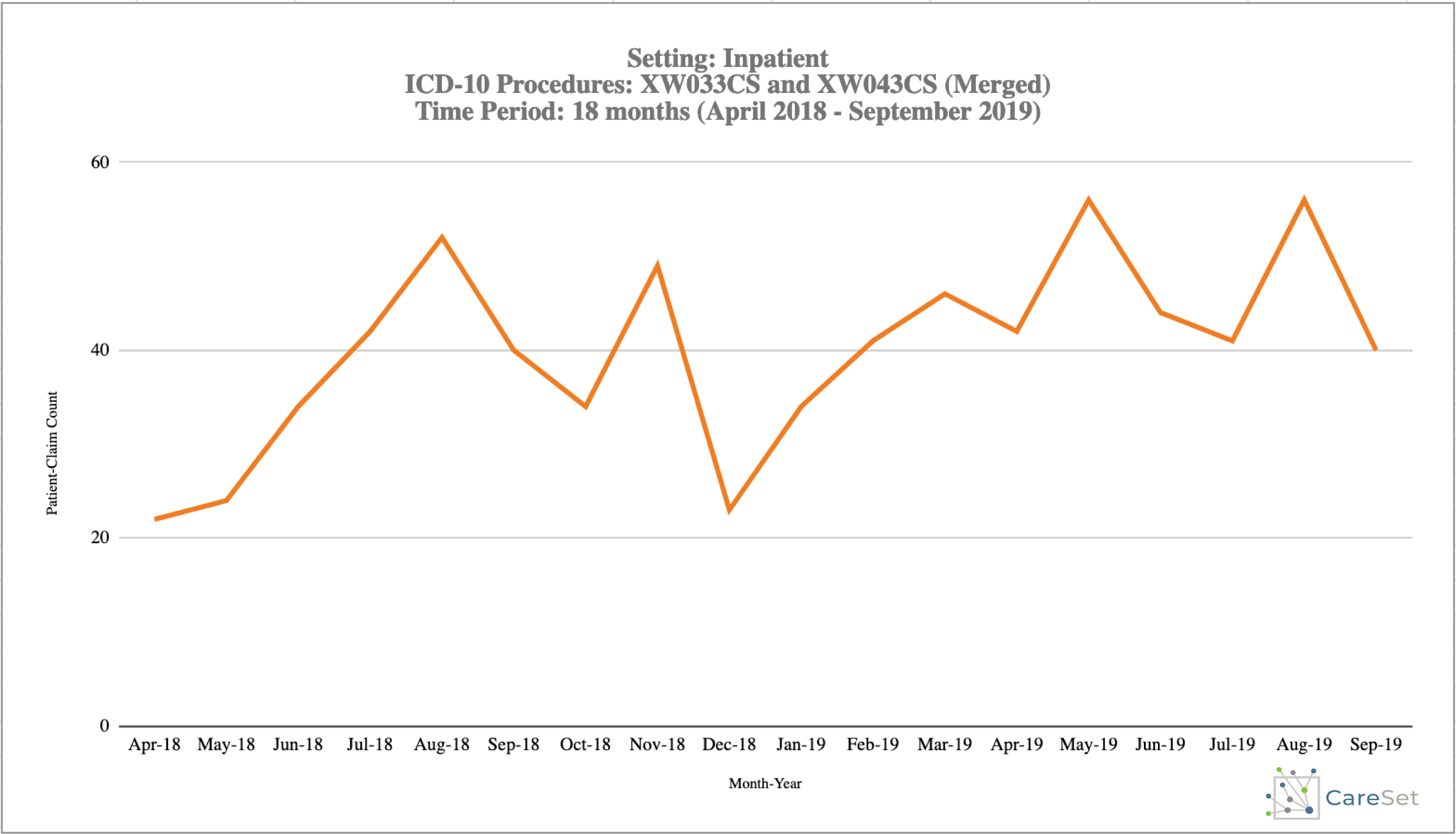 The drop in December can likely be attributed to the holidays, as there is an uptick in November. After that, treatment has been fairly steady. It will be interesting to see what the numbers show this year now that Medicare coverage is available.

Like with any form of cancer treatment, there are side effects. Dr. Sattva Neelapu of MD Anderson discusses a few of them. The National Cancer Institute goes into more detail of possible responses. Also mentioned are ways to compensate for the side effects.

Beginning in 2017 after approval, only a handful of institutions were switching patients over to CAR T-cell treatments. In May of 2018, the FDA approved CAR T-cell therapy for adults with certain types of non-Hodgkin’s lymphoma. Since then, more manufacturers have received FDA-approval, and more institutions have begun to implement the treatment. It’s illustrated in the graph above.

CAR T-cell bills are interesting. First, they use ICD procedure codes rather than traditional DRG codes in the outpatient setting. When it comes to the inpatient setting, it was added to MS-DRG 016, for now. Commenters on the proposed rule suggested it wasn’t the right match and that it should have its own MRS-DRG code. HHS stated that the technology is simply too new and that more studies and use will need to happen before that is considered.

However, the inpatient prospective payment system (IPPS), would reimburse approximately $8,000. The pharmaceutical community successfully applied for new technology add-on payment (NTAP), which was awarded by the FDA in January 2019. With the NTAP approval, a new ICD procedure code was created that allowed providers to bill up to $186,500. Although this doesn’t fully pay for treatment, it creates access for new patients for the first time at large. Recently, CMS announced that it will reimburse up to 65% of the cost rather than the typical 50%.

The Future of CAR T-cell

As more people gain access to CAR T-cell therapy and more studies continue to garner positive results, the number of patients requesting the new option will grow. Dr. Joseph Alvarnas of City Of Hope said in an interview that the 65% coverage is a great start, however, it’s delaying a more conceived system. Dr. Thomas LeBlanc of Duke University is not sure that many organizations will increase their usage of the therapy. “When CMS offers to pay just 65% of the sticker price, I suspect that many institutions will still lose six figures for each patient treated,” he notes that the price of the therapy does not include the total price of care associated.

CAR T has largely been an inpatient setting procedure. Less than 100 claims were made for institutional outpatient over the last 18 months. Just last month, an article came out discussing therapy in the outpatient setting. This could be an opportunity for those in larger cities.

Given that Medicare is aggressive in setting adoption policies for CAR T-cell therapy, hospitals, and their allied providers are eager to advance patients to their new form of treatment. However, substantial obstacles exist in their widespread use. One of the major challenges, affordability, has been mostly now that medicare covers the treatment itself. Another challenge is the commercial payers. How long will it take for patients to be able to access this technology readily? Only time will tell.