SXSW was the best of times; it was the best of times. I can’t wrap my head around this past weekend. It was filled with late nights, early mornings, and entirely too long of days. But I wouldn’t have it any other way. My first SXSW was one for the books. Working with CareSet allowed me this amazing opportunity to learn and discuss health equity with Energizing Health, in addition to hearing more about data. And I’m ready for more.

Disclaimer: Please keep in mind this entire weekend has blended into one giant blur. I’m using the help of social media and the SXSW schedule to put together the events that happened in mostly chronological order.

Day One at SX

I drive into Austin Thursday afternoon and prep for the time ahead. I knew that I would be doing a lot, so I turned in early. Day one, I was running social for Energizing Health at the Impact Pediatric startup pitch competition. Every company was incredible. They were all doing something to move the needle when it comes to pediatric health. As much innovation there has been in the health world, I feel like, for children, they get left out of the conversation. From a company that uses VR to make procedures easier, to one who helps make life easier for babies with congenital heart disease, they were all doing things to help kid health.

Meanwhile, at the Energizing Health House at Cooper’s BBQ, they were having incredible conversations, talking about many different subjects all relevant to health and our life right now. And the day didn’t end after the sessions. We had the fabulous Patricia Vonne performing that night. It was a great way to kick off the next several days. If that night was a foreshadowing of the weekend, I knew I had something to look forward to. Spoiler, I was right.

On Saturday I was relieved of my Energizing Health duties. I would be attending the conference as a CareSet employee, making sure Fred received some coverage for his session and soaking in everything else.

I began the day at the #pinksocks meetup. If you aren’t familiar with the tribe, I highly recommend you go see what they’re all about, and I’ll wait for you in my pink socks. They were all super welcoming and kind. I was HONORED to have received my socks from the famous Nick Adkins himself.

After that, it was time to begin my day at the conference. I began with Communities as Health Implementation Hubs. Alonzo Plough of the Robert Wood Johnson Foundation was moderating the panel featuring Esther Dyson, Tony Martinez, and our own Fred Trotter. What a way to start a conference! They spoke on several key issues, and it was nice hearing the different perspectives. 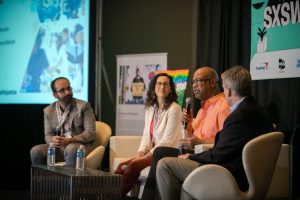 Later that evening I sat in on another session, Social Determinants and Tech: The Double-Edged Sword. And the discussion was informative. Dwayne Proctor of the Robert Wood Johnson Foundation was phenomenal. Anyone who has a chance to listen to him, pay attention.

Again, all while these sessions were taking place, the Energizing Health House was hosting more events. That night, back at Cooper’s, Miss Lavelle White brought down the house.

I began my third day at the conference with a session I personally wanted to attend. Little did I know, it was still relevant. Jump + Balance: Predict Performance, Prevent Injury featured Andrea Hudy of the University of Kansas and Phil Wagner of Sparta Science. Data. It was data-driven. They used technology to measure athletes’ injury probability, among other things. I was geeking out hard.

Following the session, I snuck into the Mayor’s Matchup Tech Innovation Pitch Competition for two pitches. (The problem I ran into throughout the conference is that there were multiple sessions I wanted to attend that were happening concurrently. Then there would be a lull where I wasn’t particularly interested in anything.)

As quickly as I snuck into the room, I was out again going back to the Marriott for another session: Using Data Analytics to Combat the Opioid Crisis. One thing I learned was that the HHS Opioid Code-a-thon created a new feature on Google Maps that helps users find drug disposals near them.

Continuing with the theme, I attended another session put on by Energizing Health: Opioid Use Disorder and Mass Incarceration. I don’t think I was emotionally prepared for that hour. They passed out opioid response kits, given by Texas Overdose Naloxone Initiative (TONI).

I took a few minutes to gather myself before going into my last session of the day. Big Data + Genomics = Earlier Disease Detection led me to this DNA sequencing device. And a sentiment that seemed to be shared throughout the weekend: data is valuable. And the sharing of data has benefits, including global health. Who doesn’t want to help the world?

We went back in time with the Spazmatics Sunday night. John Hughes couldn’t have written it.

At this point, my gauge was on E. I was running on empty and I wasn’t sure how I would make it through the last day. The effects of the weekend were starting to wage their war against my immune system. I battled onward.

We began with a great conversation on mental health, Killing Ourselves Faster: The Mental Health Abyss. Between Kim McPherson of the St. David’s Foundation, Patrice Harris of the American Medical Association, and Christine Moutier of the American Foundation for Suicide Prevention, the room went silent. We were listening to everything they shared. With everyone being so open about mental health, it sparked comments and questions from the audience. It was an open conversation. I’m sure it gave others assurance that eventually they could speak up too when they’re ready.

Next up on the list was Health Techuity in Cardiovascular Care. One of the quotes that stuck out to me was from Ronni Hashmonay of Novartis, “I would love to see patients empowered, using and sharing their data to get the right insights. They need to be empowered to make decisions.” Again, a subtle reoccurring theme throughout the weekend was data. Open data. Sharing data. Using data. Data is powerful.

After that session, we went back to the main theme, health equity. Inequity: The Unspoken Factor Fueling Cancer. Featuring Evelyn Daniels of Xealth, Brian Rivers from the Moorehouse School of Medicine, and Greg Simon from the Biden Cancer Initiative, it was an excellent discussion. Greg Simon offered a modest proposal, no co-pays for cancer drugs.

Then there was The Community Healthworker of the Future. Led by an all-women panel, they spoke of needs and issues relating to community health workers. A great call-to-action from Venus Ginés of Dia de la Mujera Latina, she asked for a community health worker mobile app. Reach out to them if you would like to help.

Later that evening, the Superfonicos were a great way to end the whole weekend.

The Final Panel at SX

To pull everything together, the final conversation was Crowdsourcing a Health Equity Innovation Movement. And I use conversation because when I hear “discussion”, I think it’s a few people discussion something, and making a decision, without your input. A conversation includes you, and that’s what the panel members did. They engaged the audience members who spoke up about different health equity issues.

Led by Stacey Chang of the Design Institute for Health, the entire hour was filled with great quotes. Between Teri Williams from the American Heart Association, Niall Brennan of Healthcare Cost Insitute, and Dr. Toni Lewis of Health Equity Cypher, I was on the edge my seat. And the questions and comments made by the crowd, the time allotted was not enough. I’ll leave you with the closing quote from Energizing Health co-founder Eddie Gonzalez-Novoa, “We need your imagination and we need your moral compass. Innovation without a moral compass is just a playground for the privileged.” 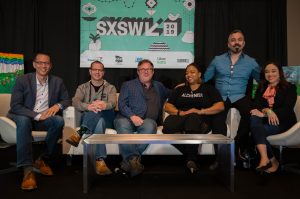 He said it best. The entire weekend can be summed up in a few phrases, in no particular order:

This first SXSW was unforgettable. And I hope the momentum we built this past weekend continues on to the next thing.

Alma helps CareSet with Data Quests. She graduated from UT Austin with a major in Anthropology. After moving to Houston she made cupcakes at the Black Hole coffee shop, managed the Caroline Collective co-working space, and then joined CareSet in 2013. She now pursues a location-independent lifestyle, working remotely for CareSet from New Mexico with her two cats as in-purrson officemates.