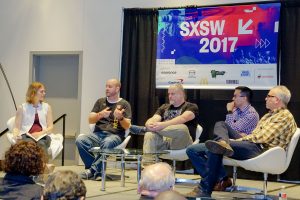 CareSet hosted “Cancer Data: Driving Medication Purchase Decisions” at SXSW Interactive on March 12, 2017 at the Austin Convention Center.  The session was part of a block of cancer programming held at the Convention Center that included an address from VP Joe Biden.

CareSet’s CEO Laura Shapland and CTO Fred Trotter hosted a discussion with senior executives from Novartis, Pfizer, and Ascension Ventures on how to become more effective in the personalized treatment of cancer and other tough diseases. Panel members discussed the pressure the healthcare industry is under to effectively treat cancer and disease while controlling costs.

“High drug prices have been in the news a lot, and given Martin Shkreli’s bad example, it’s tempting to label all drug manufacturers as price gougers looking for a quick buck,” says Laura Shapland. “But the story is more nuanced than that – for patients suffering with cancer, even an expensive drug can be a game changer. Making decisions about the value of a drug, and eventually its price, is squarely based on the quantity and quality of information available.”

These panel executives are on both the drug and health system side and expressed how they are constantly working to make sound decisions based on available data. The theme of the discussion kept returning to “How good is the data today, and what’s needed to make it better?” The panel lamented on how clinical trial data sometimes doesn’t translate to the real world, and that real world data is incomplete at best, and is at worst downright wrong.

“The good news is that the data is getting better all the time,” remarked Trotter. “With CMS making claims data more widely available and with collaborative initiatives like Cancer Moonshot increasing cooperation among stakeholders, we are getting better and better equipped to have a transparent conversation about drug value and prices with each passing year.”

VP Biden took to the stage at the Convention Center prior to the CareSet panel discussion and shared his post Vice Presidency plans to bring an end to cancer. “Jill and I decided to devote the rest of our lives to this fight against cancer,” he said as he described their personal reasons for wanting to see faster progress toward new therapies and even cures. The Bidens’ son Beau died of brain cancer in 2015. “I am unwilling to postpone for one day longer the things we can do now to extend people’s lives and so should you be.”