CareSet announced today that co-founder Ashish Patel has been named one of the Houston Business Journal’s 40 under 40. Patel helped guide CareSet through the TMCx Accelerator startup program and into expanded new offices located in Uptown, Houston. What began as a small company of six employees two years ago has grown into a company of 18 and climbing. 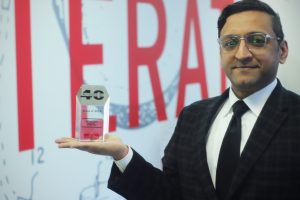 “Ashish’s passion and work ethic have helped CareSet become an up-and-coming company in health data analytics,” says Laura Shapland, CareSet CEO. “Thanks to Ashish and the rest of the team, 6 of the top 10 pharma companies now rely on CareSet for analytics.” Patel originally led the sales team in helping hospitals grow using the claims data, but more recently turned towards working with pharmaceutical companies.

CareSet led the way in liberating Medicare claims data and now works in partnership with the Center for Medicare/Medicaid Services (CMS) to release claims data as public use files. CareSet received early innovation praise for their data liberation work from publications such as WIRED Magazine and U.S. News and World Report. CareSet’s Co-founder and CTO Fred Trotter has also received praise as author of the best selling book, Hacking Healthcare, and was recognized by VP Joe Biden for CareSet’s contribution to the Cancer Moonshot Initiative.

Patel and Trotter have been working diligently to grow CareSet’s client base and revenue. Since 2015 they have been working with seasoned startup executive and company CEO Laura Shapland to increase revenue. Unlike many healthcare startups, CareSet has not accepted outside investment since crowdfunding the company’s original product offering.

CareSet (https://careset.com) is the nation’s first company with access to 100% Medicare Part A, B, C, and D claims and enables the nation’s leading pharmaceutical companies to decode Medicare claims data to guide new drug launches. Contact CareSet for more information about applying CMS data to your requirements.